Pose For The Camera

Van Ness made the announcement on Twitter by sharing the magazine cover. “Thanks for having me @CosmopolitanUK showing more variations of beauty for young LGBTQ+ people YAS QUEEN,” he tweeted. The cover features Van Ness wearing a Christian Siriano gown with some Nikes. The cover line for the issue simply reads, “Jonathan Van Ness: Yep, we did it. You’re totally welcome.” Rachell Smith handled the photography for Van Ness’ photoshoot.

The last time Cosmopolitan UK had a non-female solo cover model was Boy George back in 1984. For the publication, Van Ness was the perfect choice for its readers. “Jonathan is warm, funny, opinionated, kind and brave, all qualities that resonate with our audience. He is encouraging people to love who they are, which is at the heart of what our brand stands for – we could all do with a little more self-love in our lives,”  Cosmopolitan UK editor-in-chief Claire Hodgson told Time.

Earlier this year, Van Ness revealed he’s been living with HIV. Talking to Cosmopolitan UK, he described how much has changed since making the announcement. “This is only the beginning. I’m quickly realizing that there is still so much misunderstanding, so much sensationalizing of living with HIV. The stigma and the difficulty around the process of getting treatment is creating that. My work has only really just begun,” he told the publication.

One thing Van Ness can’t get enough of is his friendship with singer Taylor Swift. The two met while shooting Swift’s music video for “You Need to Calm Down.” The two pals almost saw one of the biggest pop stars ever together. “The other day, Taylor [Swift] and I were making soup and she asked me to go to a Madonna concert with her. That was the day before my 5 am flight to London to come here for this shoot and my tour. I knew it would be an amazing experience,” Van Ness told Cosmopolitan UK. The Queer Eye star declined the offer for self-care. “I have to prioritize self-care. Because if I don’t then my candle will burn out,” he also told Cosmopolitan UK.

Van Ness Is On The Move 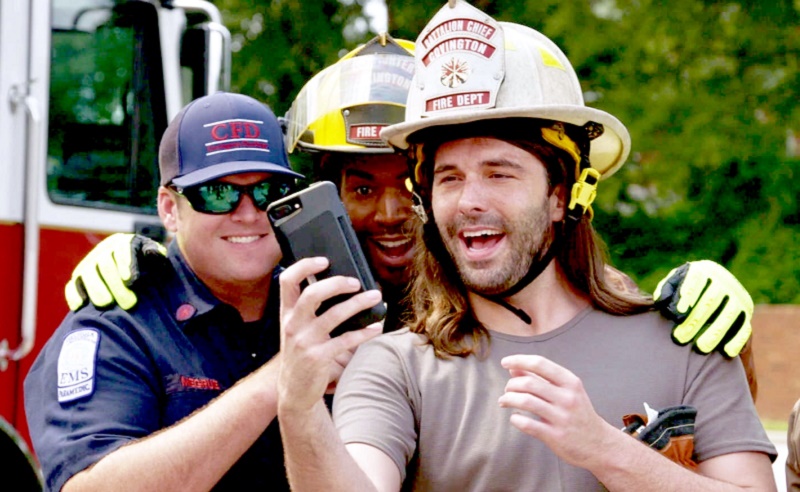 2019 has been a big year for the stylist. Things kicked off with his podcast Getting Curious with Jonathan Van Ness earning iHeartRadio’s Best LGBTQ Podcast award. In June, he was announced as the first non-female brand ambassador for nail polish company Essie. “Jonathan Van Ness truly embraces individuality and everything we hope to embody and portray as a brand. Alongside his abiding love for manicured nails, JVN exudes positivity, playfulness, and color, so it felt like an obvious partnership,” Essie vice president Greg Hui said to TODAY Style. Nail polish is something near and dear to Van Ness. “For me, polish has always been a form of self-expression. Right now that means this mosaic rainbow mani moment. Wearing it proud,” Van Ness said in an Instagram post.

In October, Van Ness released his memoir Over the Top: A Raw Journey to Self-Love via HarperCollins Publishers. Van Ness is currently touring around the world on his stand-up tour, which will conclude in Australia next February. He’s also busy shooting scenes for Netflix’s forthcoming series Spinning Out. With the love of his adoring fans, Van Ness will continue spreading joy and positivity into the new year.

These TV Shows Aren’t Coming Back In 2020