Game of Thrones fans was split with the show’s final season and many have been curious about what Game of Thrones author George R. R. Martin thought. With two forthcoming books in the works, The Winds of Winter and A Dream of Spring, Martin gives fans some perspective on the televised ending as he discusses if his version will end the same way as the show.

It takes Martin time to write and edit his novels

On his Not a Blog blog, Martin talks about delivering the novels on his own time. “I am working in a very different medium than David and Dan are,” Martin said in his blog. “They had eight hours for this final season. I expect these last two books of mine will fill 3000 manuscript pages between them before I’m done… and if more pages and chapters and scenes are needed, I’ll add them.”

For the final season of Game of Thrones, showrunners David Benioff and D. B.Weiss tried to make their medium fit their need. They expanded the episodes and each one almost felt like a full-length movie, including the massive series finale. “From the beginning, we’ve wanted to tell a 70-hour movie. It will turn out to be a 73-hour movie, but it’s stayed relatively the same. There’s a beginning, middle and now we’re coming to the end,” Benioff said at SXSW in 2017.

Some characters who died on screen are alive in the novels

One of the details that are bothering fans is the show’s large amount of casualties. Because the books and TV show are different, many of these characters are still alive in the novels but not on screen.

Martin wants everyone to feel happy about the fact that some of their favorite characters still hanging on. “There are characters who never made it onto the screen at all, and others who died in the show but still live in the books,” Martin stated on his blog. “So if nothing else, the readers will learn what happened to characters like Jeyne Poole, Lady Stoneheart, Penny, and her pig.”

When it comes to which ending is considered canon, Martin laughs it off.  “Book or show, which will be the “real” ending? It’s a silly question. How many children did Scarlett O’Hara have? How about this? I’ll write it. You read it. Then everyone can make up their own mind, and argue about it on the internet,” he concluded in his blog. 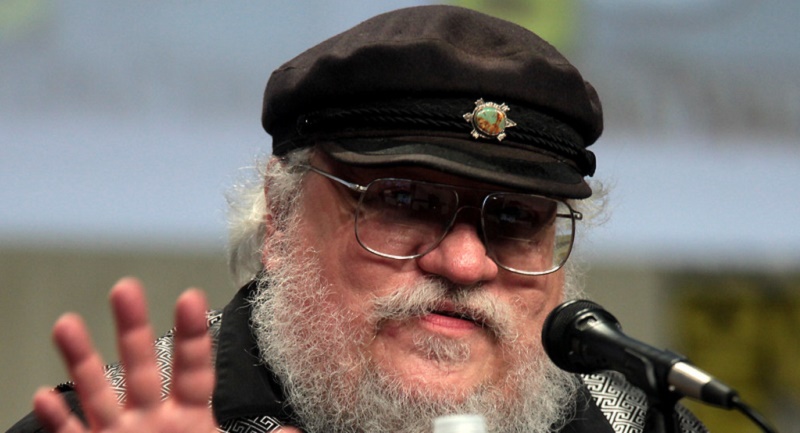 Aside from finishing his books, Martin will be busier with his involvement in a slew of programming in the works. On HBO, he’ll be working on the Game of Thrones spinoff House of the Dragon. This prequel will include material from Fire and Blood. “The Game of Thrones universe is so rich with stories. We look forward to exploring the origins of House Targaryen and the earlier days of Westeros along with Miguel [Sapochnik], Ryan [Condal] and George,” HBO Programming President Casey Bloys said at WarnerMedia Day. Recently, the prequel series Bloodmoon was canceled by the network. This series was set to take place thousands of years before the Game of Thrones show.

On Hulu, Martin will be executive producing two series based on his Wild Cards novels. He’s has been attached to the Wild Cards series since 2016. In 2011, the series was slated to be a box office film, but plans were canceled. Martin is also working on an undisclosed program for The History Channel.

With so much on his plate, there’s no telling when the final two books will be released. Fortunately, Game of Thrones fans will knowingly wait a while longer to read its gripping finale.